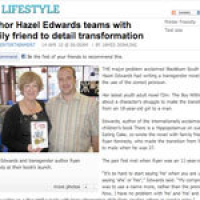 THE major problem acclaimed Blackburn South author Hazel Edwards had writing a transgender novel was the use of the correct pronoun.

Her latest youth adult novel f2m: The Boy Within is about a character’s struggle to make the transition from an 18-year-old girl to a man.

Edwards, author of the internationally acclaimed children’s book There is a Hippopotamus on our Roof Eating Cake, co-wrote the novel with family friend Ryan Kennedy, who made the transition from female to male when he was 27.

The pair first met when Ryan was an 11-year-old girl.

“It’s so hard to start saying ‘he’ when you are used to saying ‘she’ or ‘her’,” Edwards said. “My compromise was to use a name more, rather than the pronoun. Now, I have no problem with ‘he’ and ‘his’ and I think of my co-writer as a thoughtful male with keen observation skills from reading others in gender roles.”

Edwards said she had the same problem with pronouns when writing about the character Skye, who eventually becomes Finn in f2m: The Boy Within.

But for Kennedy, the character, like himself, was always male even before the transition. Kennedy said the book was not autobiographical, but was based on journals he kept during his treatment.

“I was far older (than the character) when my own transition took place and I wasn’t in punk bands then, unlike the character,” Kennedy said. “A lot of the book was quite directly taken from how I felt, especially the medical scenes, which drew on my experiences quite strongly.

“I drew on how you feel sitting in these life-changing appointments and how everything has seemed to lead up to this point.”

He said the reactions to the character’s gender change from friends and families were a mix of generic reactions meshed with reactions he experienced first-hand.

The pair co-wrote the book from different countries using email and the online communication tool Skype. The work took 18 months and more than 100 drafts to complete.

The book has already created much discussion, including being criticised for the transition going   far too smoothly for the lead character, Skye, for it to be a dramatic element of the book.

“I find that an interesting criticism because it touches on a perception that our lives are tragic and dramatic and it often doesn’t happen like that,” Kennedy said.

“We change into the gender we want and our lives go on happier.”

f2m: The Boy Within is published by Ford Street and is available for $19.95 from www.fordstreetpublishing.com